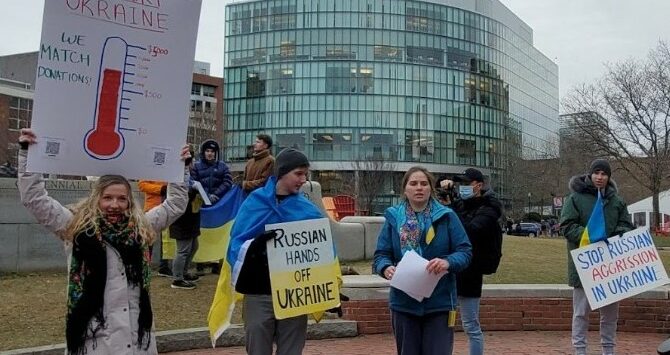 We are excited to share with you our series Razom Says Dyakuyu. “Dyakuyu” means “thank you” in Ukrainian. Our work supporting Ukraine and getting humanitarian aid on the ground where it is needed most, would not be possible without the generous donations made by donors. Within this series we are highlighting some of the thousands of amazing donors and fundraisers that Razom has been very fortunate to gain support of.

Students at Northeastern University in Boston came together to fundraise more than $30,000 for Ukrainian relief efforts this spring. Ukrainian-American students Deanna Zawadiwsky, Terenia Hankewycz, and Zachar Hankewycz organized a Ukrainian Cultural Club at the University with Deanna becoming its first president, Terenia vice-president, and Zachar its treasurer.

The students sent Razom a detailed letter on how they started the club, fundraised, and got their community involved. We are reprinting their letter, written by current Northeastern University Ukrainian Cultural Club president Zachar, in the hopes that it may inspire other students.

Razom and all the people who we’ve been able to support on the ground in Ukraine during the war say “dyakuyu” to Deanna, Terenia, Zachar, and all the students at Northeastern University who contributed.

At the start of the academic year, the Ukrainian Cultural Club didn’t officially exist at Northeastern University. We were an informal group of 5-10 Ukrainians who met up occasionally for social and cultural events (like cooking varenyky and creating pysanky). Most of us were from the Ukrainian diaspora, and many of us knew each other before college through Plast.

The night the war started, we all knew we had to do something. The thought of sitting through lectures or work as if nothing had changed was just unbearable, so we decided to hold a rally and fundraise the very next day. Each of us took a day off from work or classes. In the morning, we made signs and printed leaflets to hand out; at noon, we gathered in a central location on campus.

Our original group was small, and although we tried to publicize our event, we didn’t expect many participants on such short notice. But we were shocked – students showed up from all around the Boston area, from BU, Suffolk University, Berklee, and Tufts, to name a few. Many were Ukrainian, but we were also joined by students of various other backgrounds, stopping by between classes to hold a sign and support us.

Our initial fundraising goal was $1,000, and to incentivize donations, our group decided that we’d collectively match any donations we received that day. We ended up raising almost $4000 (not including the matching donations)!

After that, we decided two things: that we would continue holding fundraisers, and that we should become an official club. We wanted every Ukrainian student at Northeastern to know that they are not alone, that they have support. With the help of the Center for Intercultural Engagement, we were able to obtain official club status at Northeastern.

So the next week, we did the same thing. We prepared our signs, took a day off, and continued fundraising. Our members made leaflets, posters, stickers, origami flowers, and flag pins to help fundraise. One of our members organized a fundraising fair, and reached out to local businesses for product donations which we could sell. We were joined by the Art Blanche club for the fair, where we sold food and art, played Ukrainian music, and handed out leaflets about the war in Ukraine (and how people can help out). On April 7th, we coordinated a national vigil with over 20 Ukrainian organizations in American universities. Standing on the steps of the central building on campus, with the flag of Ukraine alongside the American flag on the rooftop, our members spoke about Ukraine’s history, its people, and their suffering.

Along the way, various other organizations at Northeastern reached out, asking how they could help. Alpha Epsilon Pi, BURSA (Burmese Student Association), Active Minds, Studio Art Club, Art Blanche, AMSA (American Medical Student Association), and others all held fundraisers for Ukraine, and asked us for advice on potential recipients of these donations.

We’re glad that we’ve managed to connect with so many Ukrainians, including fellow students, in the Boston area as a result, although we wish it was under happier circumstances. Everyone helped out, and everyone supported one another. At the start, there were few of us and we were disorganized; now, we’re an official club with many new members, and we plan to continue fundraising for as long as there is a need.